He graduated with a teaching diploma (for electric guitar in jazz) from the Zurich School of Music and Drama (Hochschule für Musik und Theater Zürich). He went on to study composition at the jazz department of the Lucerne School of Music  Musikhochschule Luzern) and obtained a Master of Arts in Music.

Tour-acitivities brought him through Switzerland, across Europe, to the United States and to South Africa.

He has been awarded and supported with: 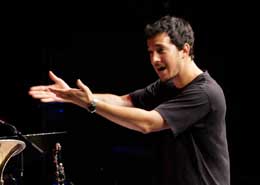